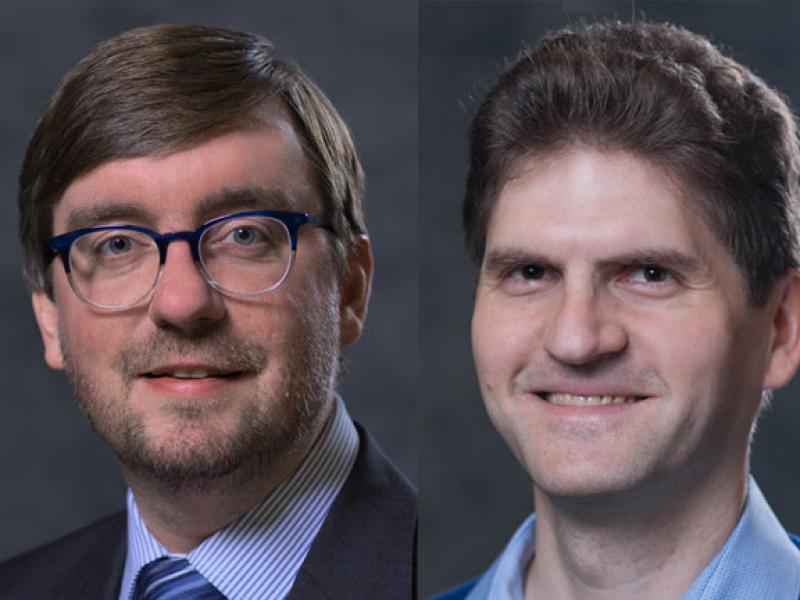 Rensselaer Polytechnic Institute’s Scott Forth, assistant professor of biological sciences, and Peter Kramer, professor of mathematical sciences, have received a $359,572 grant  from the National Science Foundation (NSF) to develop a better understanding of a cellular process that, when errors occur, is linked to cancer. This project will be pursued in collaboration with Meredith Betterton, professor of physics at the University of Colorado at Boulder.

During mitosis, which is an essential process for life, cells divide their genetic material equally into two new daughter cells. Microtubules and their associated proteins in cells build what is called the bipolar mitotic spindle, which is responsible for this equal genetic division. Diseases such as cancer are linked to errors occurring during the formation of this spindle.

“A critical initial step in building the spindle involves separating structures called centrosomes that form each of the two spindle poles,” Forth said. “This involves a variety of proteins that bind and generate forces on the microtubules to push everything into the correct location and at the correct speed. How these forces are produced and regulated by the many different proteins involved is unclear. This is what we will address.”

Forth and Kramer’s team will use the NSF grant to utilize experimental biophysical laboratory results to create computational physical models and build statistical parameterization frameworks to better understand how spindles are formed and how the different proteins drive this mechanical process.

“Dr. Forth’s novel biophysical experimental capabilities provide the opportunity to develop and calibrate a theoretical model of early human mitotic spindle assembly,” Kramer said. “The elements of this model can be validated by direct measurement and computational simulation. It will facilitate understanding of possible pathways to errors in spindle formation that may be associated with disease.”

Educational outreach to high school and college students on the value of interdisciplinary collaboration in life sciences is also planned. Forth and Kramer’s team will include undergraduate and graduate student researchers in physics, as well as biology and math.

“Collaboration across disciplines and schools is one of Rensselaer’s fundamental values, and it sets us apart,” said Curt Breneman, Dean of the School of Science. “This new work merging expertise in biology and mathematics is an excellent example of the kind of interdisciplinary research that breaks new ground and leads to new discoveries. I look forward to seeing the impact of their results.”