Improving Tools for Modeling the Interaction of Fluids and Solids 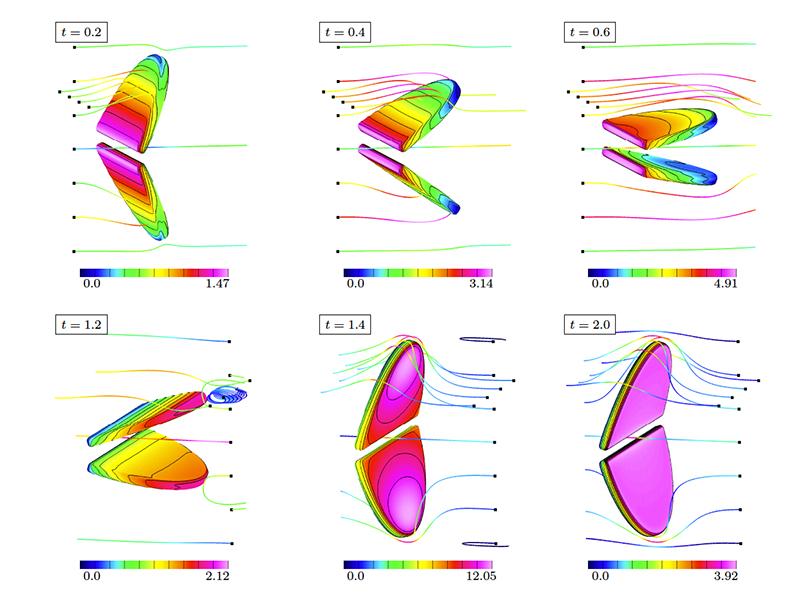 Researchers at Rensselaer Polytechnic Institute have received an award of nearly $385,000 from the National Science Foundation (NSF) for their project to develop new and improved simulation tools for modeling physical problems relating to the interaction of fluids and solids, called fluid-structure interaction (FSI) problems. Blood flowing in veins/arteries can be posed as an FSI problem, and issues such as aneurysms can be simulated mathematically.

Approximately 84 million people in this country suffer from some form of cardiovascular disease, causing about 2,200 deaths a day.

The project, titled “High-Order Accurate Partitioned Algorithms for Fluid-Structure Interactions and Conjugate-Heat Transfer,” is led by principal investigator William Henshaw, the Margaret A. Darrin Distinguished Professor in Applied Mathematics, and co-principal investigator Donald Schwendeman, professor and head of the Department of Mathematical Sciences.

According to Schwendeman, FSI problems arise in many areas of science and engineering, including human health. In recent work, the Rensselaer researchers have studied an FSI problem modeling the dynamical behavior of a bi-leaflet mechanical heart valve.

The mathematical models governing the behavior of the fluid and the solid are systems of partial differential equations based on certain physical laws, such as conservation of mass, momentum, and energy. “The models are complex,” Henshaw said, “and exact solutions of the governing equations are typically unavailable, so numerical methods are developed to obtain approximate solutions. Such numerical methods exist to solve the equations for the fluid and solid separately, and the difficulty for FSI problems is to merge the methods so that the coupled solutions are accurate approximations of the exact solutions of the equations.”

The Rensselaer team has developed new algorithms that overcome the limitations of existing FSI methods. These new methods remain accurate when standard methods fail and can provide solutions for important classes of problems, such as the mechanical heart valve. The numerical methods use composite overlapping grids to describe the three-dimensional (moving) domains of the problems. Henshaw is the principal developer of this software, which is available at overtureframework.org. “The exciting aspect of the work is that many complex FSI problems can now be solved accurately and efficiently, and the software is freely available to the scientific community,” Schwendeman said.

The newly developed simulation tools for FSI problems will be useful for a broad range of applications. There will be many potential extensions of the new work to treat important problems, such as those in aeronautical engineering (flow-induced vibrations of structures), biomedical engineering (modeling mechanical heart valves), mechanical engineering (wave energy generation devices), and more. In addition, the theory, algorithms, and novel interface coupling conditions developed for this project will be useful for the broader scientific community.