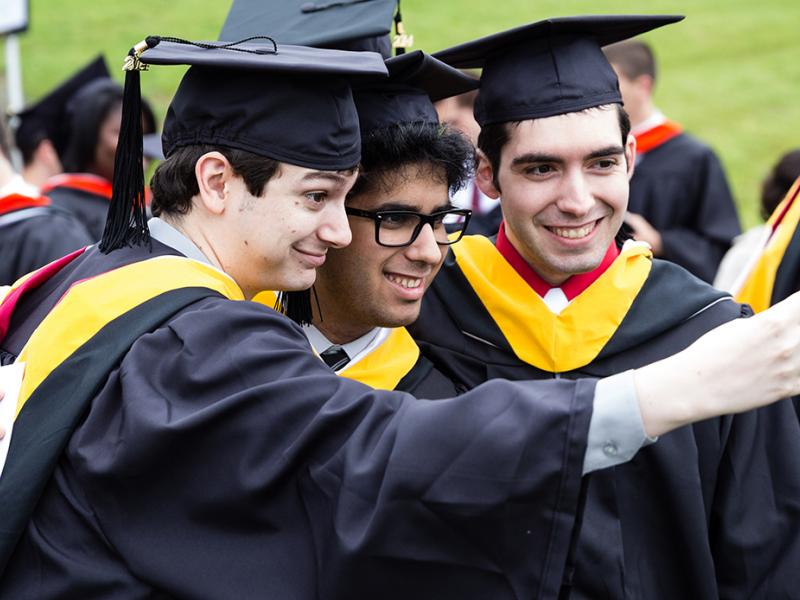 To the 1,613 graduates awarded degrees during the Rensselaer Polytechnic Institute Commencement ceremony Saturday, President Shirley Ann Jackson urged courage of their convictions and confidence in their capabilities.

“Respect your own grand, but incomplete, ideas—the ones you find exciting—the ones others find vague because they cannot yet see the future you see,” President Jackson said.

President Jackson’s Commencement address noted the increasing importance of data in today’s society and urged members of the Class of 2014 to be active participants in the data-driven revolution. “As you interact with increasingly intelligent computer systems—as you use them and your own intellects to pick needles out of the haystacks of data of increasing size, number, and complexity—as you seek the correlations between needles in different haystacks—it is up to you to give meaning to data, and to use it, and to use the education we have given you, to solve important problems—to uplift us and to improve lives,” President Jackson said.

“Those who create transformational change are those who use their abilities and the technology available responsibly; who are able to find, or create, clarity in complex situations; and who live out the courage of their convictions,” she added.

“As the graduating Class of 2014, you stand at an important inflection point. You’re facing a new age being made possible by a new natural resource—data. I would assert that what steam was to the 18th century, electricity to the 19th, and hydrocarbons to the 20th, data will be to the 21st century,” Rometty said.

King, who received an honorary Doctor of Science degree, offered graduates advice based on her career as a world-renowned scientist. “The role of the scientist as a citizen of the world leaves us with both opportunities and responsibilities,” she said. “In carrying out projects motivated by this role, I have found three principles to be particularly good guides: one, the most useful projects are proposed by people on the front lines; two, the most righteous projects demand the most rigorous science; and three, no question is too big to ask.”

Berners-Lee, who received an honorary Doctor of Science degree, urged the Class of 2014 to take lessons from childhood with them into the future. “Be good citizens, like you learned in kindergarten. This nowadays mostly means taking all the values you have learned from your parents and teachers and showing them how to apply these values in a connected, networked world,” he said.

Two-term Class President Michelle Lamberta, who majored in biomedical engineering, also addressed the graduates. “Today is the day that we announce to the world that we have done it. We have finally made it to the culmination of four years of coursework, exams, and late nights,” she said. Lamberta, of Bayside, N.Y., is pursuing a career in the medical device industry in New York City.

Bachelor’s, master’s, and doctoral degrees were conferred to students from each of the five schools within Rensselaer: Engineering, Science, Architecture, the Lally School of Management, and Humanities, Arts, and Social Sciences. A total of 1,179 bachelor’s degrees, 407 master’s degrees, and 163 doctoral degrees were awarded today, with more than 100 students receiving multiple degrees. The 208th Commencement ceremony was held at the East Campus Athletic Village.

For more information about the Class of 2014, visit:

Ginni Rometty is the chairman, president and chief executive officer of IBM. She has held a series of leadership positions in IBM, most recently as senior vice president and group executive, IBM Sales, Marketing and Strategy. She previously served as senior vice president, IBM Global Business Services, where she led the successful integration of PricewaterhouseCoopers Consulting. In prior leadership roles, she served as general manager of IBM Global Services, Americas, as well as general manager of IBM’s Global Insurance and Financial Services Sector. She received a bachelor’s degree with high honors in computer science and electrical engineering from Northwestern University.

Sir Timothy Berners-Lee invented the World Wide Web and wrote the first Web client and server. He is the 3Com Founders Professor of Engineering in the School of Engineering with a joint appointment in the Department of Electrical Engineering and Computer Science at the Massachusetts Institute of Technology, where he also heads the Decentralized Information Group. He is also a professor in the Electronics and Computer Science Department at the University of Southampton, UK. He is the director of the World Wide Web Consortium, a Web standards organization, and is director of the World Wide Web Foundation, launched to coordinate efforts to further the potential of the Web to benefit humanity. He graduated with a bachelor’s degree with first honors from The Queen’s College at Oxford University, England.

Mary-Claire King is the American Cancer Society Professor at the University of Washington in Seattle. She was the first to show that breast cancer is inherited in some families, as the result of mutations in the gene that she named BRCA1. She pioneered the use of DNA sequencing for human rights investigations, developing the approach of sequencing mitochondrial DNA preserved in human remains, then applying this method to the identification of kidnapped children in Argentina and subsequently to cases of human rights violations on six continents. She received her bachelor’s cum laude in mathematics from Carleton College in Northfield, Minn.; her doctoral degree in genetics from the University of California, Berkeley; and her postdoctoral training at the University of California, San Francisco.