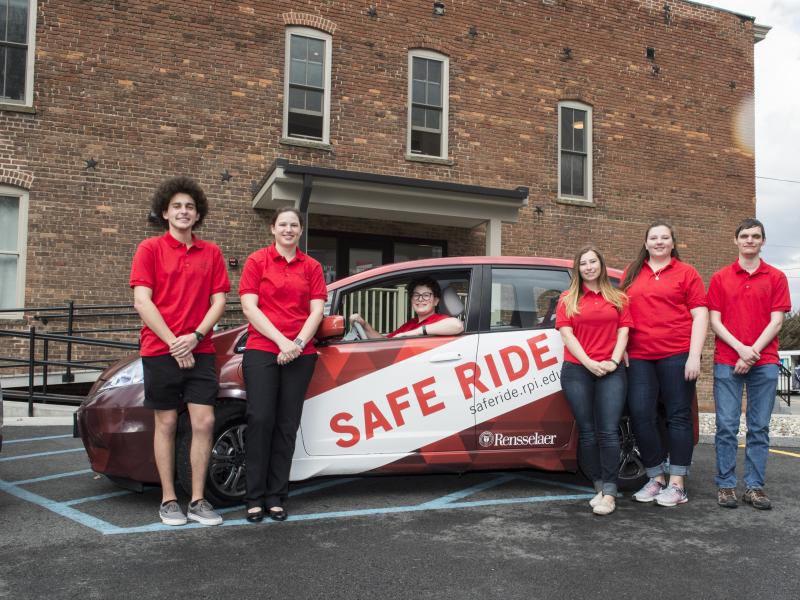 The Office of Student Life at Rensselaer Polytechnic Institute has launched a new program designed to provide safe transportation for students during evening hours, which will supplement the Institute’s existing shuttle service. Safe Ride is a ride-sharing service provided to students as a free and safe alternative to walking alone after dark. The service operates from 6:45 p.m. to 3 a.m. seven days a week, with the exception of holidays, academic breaks, and inclement weather.

The new program was officially kicked off at an event on campus today, with remarks from student leaders, Vice President for Student Life LeNorman Strong, and Rensselaer President Shirley Ann Jackson.

“While we educate great explorers and adventurers at Rensselaer, we understand that our first obligation, always, is to safeguard the young people in our care,” said President Jackson. “So, first we expanded the routes and times of operation of our shuttle buses, but we decided that was not enough.

“So now, in addition to the shuttle bus service, we have a fleet of two electric vehicles donated by American Honda Motors—and emblazoned, appropriately, in red and white—to offer rides until three in the morning, seven days a week,” she said. “Demand already has been quite intense: In just the first two weeks of the service, beginning in late January, 312 rides were given to 440 students.”

Safe Ride is staffed by 23 students and the associate dean of Off-Campus Commons. The program has a dispatcher staffing the phone and computer and two students who ride and drive in each of the two designated Honda Fit electric cars.

Safe Ride began in response to the need to provide students more options to get home safely at night. After a group of students met with President Jackson to share their concerns, she asked various campus constituents to create an expanded program that would mitigate risk for Rensselaer students.

“We have worked diligently to make navigating campus and Troy safe for our community members,” said Travis Apgar, assistant vice president for student life and dean of students. “The Safe Ride program adds an additional dimension to the multilayered security approach complementing the extended shuttle bus service, the Public Safety escort service, and the dedicated Troy Police Department patrols of the campus and downtown areas. I couldn’t be more pleased that Safe Ride is off and running, with students already taking advantage of the service. We look forward to hearing feedback and input from students as they experience Safe Ride.”