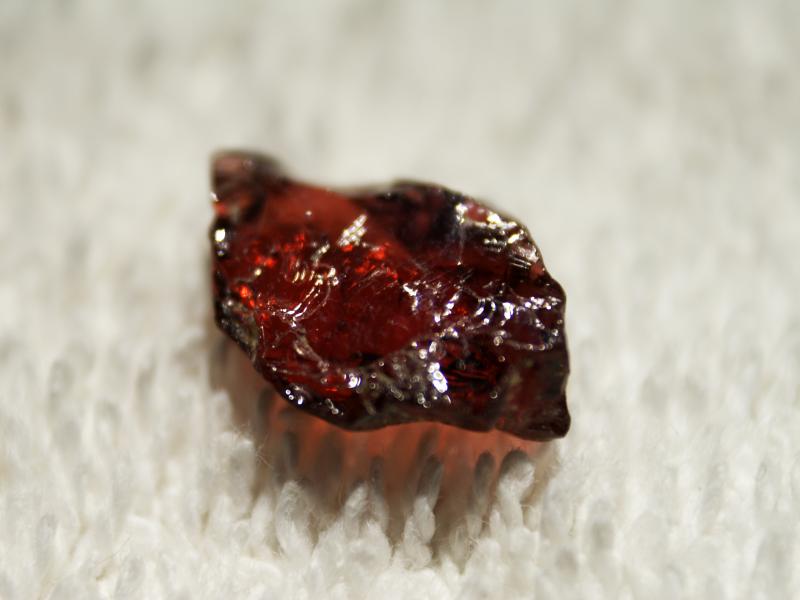 Among geologists who study powerful earthquakes and volcanoes, there is a mystery: as one of Earth’s tectonic plates slides beneath another in a subduction zone, water is squeezed from certain minerals, lubricating earthquakes and fueling volcanoes in hot spots like the Pacific Ocean “Ring of Fire.” But equations that predict where the forces of subduction wring water from stone consistently point to locations far from the site of actual cataclysms.

By applying a new spectroscopy technique to garnet containing fragments of quartz, metamorphic petrologist Frank Spear of Rensselaer Polytechnic Institute thinks he’s solved the puzzle. His early research shows that the equations are incomplete, lacking the significant variable of “overstepping,” the additional energy needed to initiate a process, in this case, the decomposition of water-bearing minerals.

“The real culprit in powerful volcanoes and earthquakes is water, but scientists have been unable to determine where that water comes from,” said Spear, a professor and head of the Rensselaer Department of Earth and Environmental Sciences. “Conventional thermodynamic equations predict that water is released at too shallow a depth to occur at the known locations of volcanoes and earthquakes. But when you factor in the overstepping we’ve discovered, the locations coincide. The idea of overstepping is an enormous paradigm shift.”

His research is supported by a three-year $419,247 grant from the National Science Foundation.

As one tectonic plate is pushed beneath another in a subduction zone, sediments and minerals are carried deep into the Earth, with pressure and temperature mounting with increasing depth. Early in the process liquid water is squeezed from the pore spaces between rocks, but many minerals – such as micas, serpentines, and chlorites – contain water as part of their mineral structure. Chlorite, for example, contains about 10 percent water by weight.  When water-bearing minerals finally succumb to increased temperature and pressure, they release water.

The water acts as a lubricant in the fault zone created between two plates, reducing the strain on the fault and allowing the plates to slide past one another, producing an earthquake. Subduction zones produce some of the world’s biggest and most destructive earthquakes; the largest magnitude earthquake yet recorded – a magnitude 9.5 earthquake in 1960 near Valdivia, Chile – occurred in a subduction zone. The water also acts as a flux on surrounding rock, depressing the melting temperature of rock, which melts into magma that rises to the surface and erupts as a volcano.

At the point at which the water is released, it creates clues Spear tracked back to its origin. New minerals form in the metamorphosing crust, including garnet, which is produced by the breakdown of water-bearing chlorite. The garnet forms under pressure, and sometimes, as it does so, it traps fragments of surrounding minerals in its grip, fragments that retain a record of the pressure under which the garnet formed. Spear found such garnets, which formed around tiny fragments of quartz, on an island in the Greek Cyclades.

In his lab, Spear and his graduate students used Raman spectroscopy – commonly used in chemistry to identify molecular composition of a sample – to examine the quartz embedded in the garnet. In Raman spectroscopy, laser light is shined onto a sample, and the energy of the photons is shifted up or down based on the interactions between the light and the sample. The difference between the frequency of the outgoing and returning light provides a definitive structure signature.

Quartz at ambient pressure produces a well-known signature. But the peak of the signature from the quartz in the Cyclades samples was shifted to a higher value, indicating the pressure on the grain. Because the Raman signal shift of quartz has been carefully calibrated, Spear was able to use it to determine the pressure, and therefore the depth and temperature, at which the garnet crystallized around the quartz.

“What we discovered when we did this is that the garnet forms not at the shallow depth where the thermodynamic calculations predicted, but much deeper down, near the origin of volcanoes and earthquakes,” said Spear.

The finding also indicates that the garnet doesn’t crystalize at equilibrium, as is the basis of thermodynamic calculations predicting that process. That, said Spear, “was a total surprise.” While initiation of most processes requires activation energy – or overstepping – to some extent, researchers always assumed that the activation energy to initiate nucleation of garnet would be trivial. But the results suggest significant overstepping of 50 to 70 degrees Celsius.

The initial research, published in a series of papers beginning in 2014, was based on three samples from a single site on Sifnos. The new funding will support a broader investigation using 10 to 20 samples taken from five separate locations, to determine whether the findings were “a quirk, or a universal truth.” Spear is also working on developing calculations – and a new “maximum driving force method” – that will incorporate observed overstepping to yield more accurate predictions.

Spear’s research fulfills The New Polytechnic, an emerging paradigm for higher education which recognizes that global challenges and opportunities are so great they cannot be adequately addressed by even the most talented person working alone. Rensselaer serves as a crossroads for collaboration — working with partners across disciplines, sectors, and geographic regions — to address complex global challenges, using the most advanced tools and technologies, many of which are developed at Rensselaer. Research at Rensselaer addresses some of the world’s most pressing technological challenges — from energy security and sustainable development to biotechnology and human health. The New Polytechnic is transformative in the global impact of research, in its innovative pedagogy, and in the lives of students at Rensselaer.