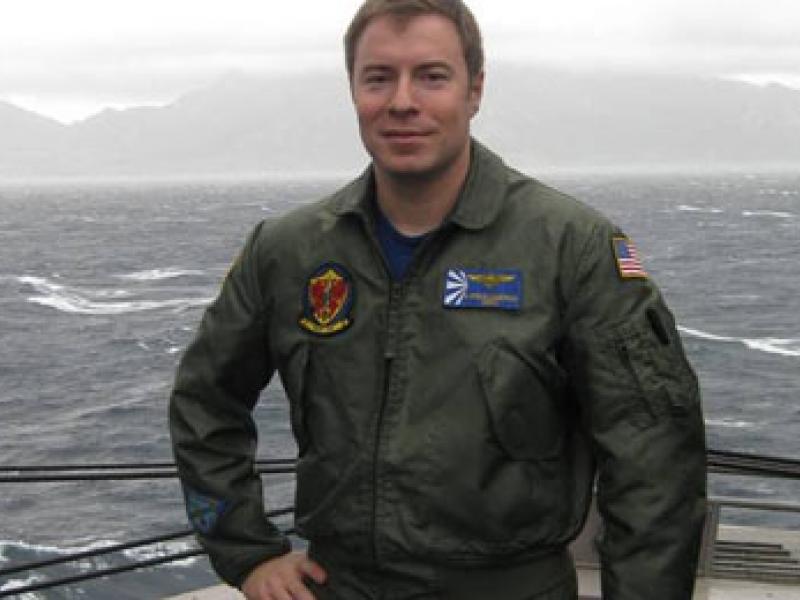 Two years ago, Class of 2003 graduate Lt. Miroslav “Steven” Zilberman, who was serving as a Naval pilot aboard the USS Dwight D. Eisenhower, made a decision that saved the lives of three of his crewmates. For his selfless act of bravery, Rensselaer Polytechnic Institute will host a special plaque dedication ceremony in honor of Lt. Zilberman on Saturday, March 31.

While returning from a 2010 mission in Afghanistan, Zilberman’s twin-engine aircraft lost one engine over the Arabian Sea. The starboard propeller had shut down, causing the plane to become unstable and plunge. According to Navy officials, Zilberman ordered his crewmates, including the co-pilot, to bail out, and held the plane level for them to do so, despite uncontrollable forces. Zilberman went down with the aircraft on March 31, and was declared dead three days later, his body lost at sea. For his final act, Zilberman was posthumously awarded the Distinguished Flying Cross, one of the highest military awards.

“It is a difficult, but honorable, occasion that brings us together,” said Rensselaer President Shirley Ann Jackson. “Difficult still, after two years, to accept the loss of Lt. Miroslav Zilberman, Class of 2003. Honorable because a life lived as his was deserves to be remembered, to be treasured. So today we remember, and honor a hero—a son, a friend, a student—and a cherished husband and father.”

Zilberman followed an unlikely path to becoming a Naval pilot. Born in Kiev, Ukraine, he was in the sixth grade when his parents, Anna Sokolov and Boris Zilberman, emigrated to the United States. His mother, a biochemist, worked for the Kiev Institute of Hygiene after earning a master’s degree and Ph.D. in the field. His father is an accomplished construction engineer. Zilberman enlisted in the Navy out of high school, and was commissioned in 2003 after graduating from Rensselaer with a degree in computer science in just three years. He had plans to go on to study medicine. His leisure reading while in action was organic chemistry texts.

President Jackson noted that Zilberman was “a young man who embraced challenge, met the world with faith in his heart, and laughter on his lips. A man who treasured his family, his friends, and his country. A man whose final, selfless act in this world ensured that three other families would welcome their sons home.”

“The Rensselaer Alumni Association is honored to be a part of recognizing a true American hero,” said Jeff Schanz, assistant vice president for alumni relations. “His selfless act of bravery is a reminder of the thousands of men and women who serve every day to protect our freedom all around the world.”

The ceremony—beginning at 11 a.m.—will be held on the Rensselaer campus in the Alumni Sports and Recreation Center (Armory), room 209. Lt. Aaron T. Roth ’05, assistant professor of Naval Science at Rensselaer will open the program. The keynote address will be delivered by President Jackson; Navy Commander Joseph Finn; Marilyn Rofsky, a friend, mentor, and teacher; and Valery Bazarov, director of family history and location at the Hebrew Immigrant Aid Society. Members of the Rensselaer campus community, along with Zilberman’s family members, close friends, Navy officials and members of the Rensselaer Navy Reserve Officer’s Training Corps (ROTC), and family members of Jeremy Arnott, Rensselaer Class of 2005, one of the surviving crewmen and a good friend of Zilberman’s, will be present. The program is not open to the general public.

Although two years have passed, it is still difficult for Anna Sokolov to talk about her son. “I still cry more than talk,” she said. “He was my only child.”

In a letter that she devoted to Steven on his 32nd birthday, she wrote, “I would like to grow to your unreachable heights of devotion and love that saved the life of a lot of people. I want to have strength and courage to grow to your level my son, my pride. You always put everyone’s interest ahead of yourself.”