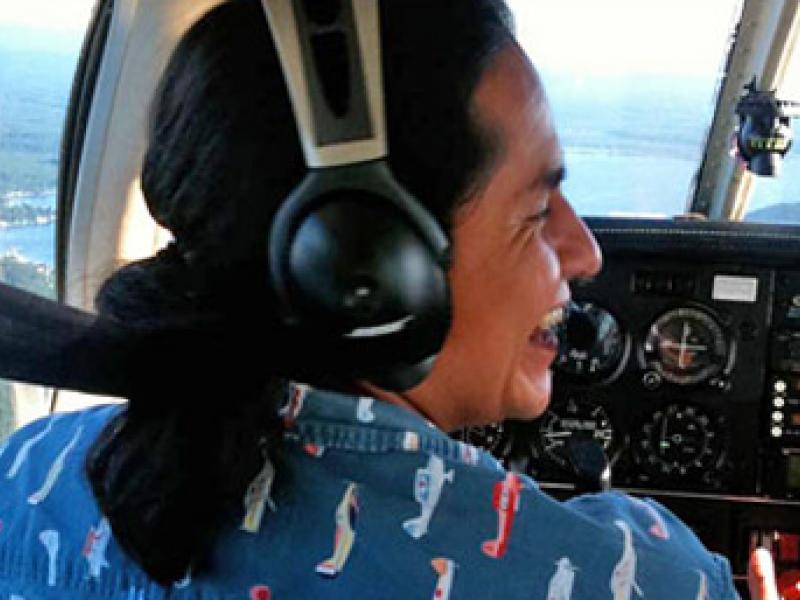 Flying an airplane takes skill and Varela knows this all too well. The associate professor of computer science is also a licensed pilot. But, what Varela also knows is that flying an airplane also takes data—and lots of it. Pilots are constantly receiving and inputting data from air traffic controllers, weather reports, and the multiple sensors throughout the plane to help ensure a safe flight. But what happens when that data isn’t up-to-date, or worse, incorrect?

“Data should drive the flight systems in an aircraft to create active and constantly updated flight data for the pilot,” Varela said. “The idea is that rather than pulling data from sources such as weather forecasting services or air traffic control, which is more static in nature, the system would constantly be comparing and updating source data so that the flight plan is always up to date.”

According to Varela, data must understand the connections with other data. For example, we can’t be on time for a meeting if we didn’t get the text message that the meeting was moved to an hour earlier. The data points weren’t connected and we are late for the meeting. In the same way, a pilot or autopilot system cannot take the right action when the data they are receiving is out of date or plain wrong. This may have been the problem with the tragic crash of Air France flight 447, which crashed into the Atlantic in June of 2009 killing, all on board, according to Varela.

The evidence from the crash has suggested that the pilots on board raised the nose of the plane when it shouldn’t have been brought up, he said. A plane with a nose too high will lose speed until eventually it stalls completely. Since the crash, many experts have purported that an equipment failure may have provided inaccurate information to the autopilot, causing it to disengage, said Varela. The pilots may have then incorrectly reacted to the emergency by raising the nose of the plane when in fact it needed to go down to break the stall, according to Varela.

Varela himself experienced this exact type of equipment failure during one of his own flights. Fortunately, Varela was able to determine the failure by comparing bad airspeed data to the ground speed data provided by his own GPS device. It turned out that ice had developed on the airspeed sensor, causing it to fail. Varela did not lower the nose of the plane as he normally would in response to such readings and instead deiced the sensor and safely finished his flight. His simple data comparison revealed a misreading and likely saved his life.

An active and redundant flight system may help prevent crashes caused by sensor or other data errors. For example, by comparing the airspeed data to the ground speed data, a flight system would be able to fact check a bad airspeed reading, assuming reasonable constraints on the wind speed. If the pilot is only operating by air speed data alone, they would have no way of knowing that there is an error in the system and they would respond to the incorrect data, upsetting the balance of the plane. The ground speed data would instead provide a fact checking mechanism because if air speed were swiftly changing, ground speed would be doing the same. If airspeed is changing, but ground speed remains unchanged, Varela’s more active flight system would be able to notify the pilot of the discrepancy, allowing for more informed decision making.

“The data being used for the actual flight is a little bit old and certainly not ideal,” said Varela. “Pilots then end up flying a suboptimal and even unsafe plan.”

The new system Varela seeks to develop would allow for the easier and faster inclusion of new data. This means that when a sensor gets new data such as a change in air pressure or temperature, it would trigger dependences with other data such as the data stream from the sensors that detect potentially lethal icing on the plane’s wings. The flight plan could then be updated as needed. In this manner, pilots would always be flying an updated plan.

“The programming will model the data mathematically, so a pilot can tell that the data being received is wrong with some probability and have more information to make a flight decision.”

“Weather forecasts are by their very nature, not a sure thing,” Varela said. “But, other data points are.

Varela hopes to create a new system that more easily deals with data streams and quickly admits new data. Such a system could be expanded to include unmanned flight systems and even beyond aviation. The example given by Varela was the citation of scientific findings, where data needs to be well connected to ensure it is accurate and constantly updated as new findings are created.