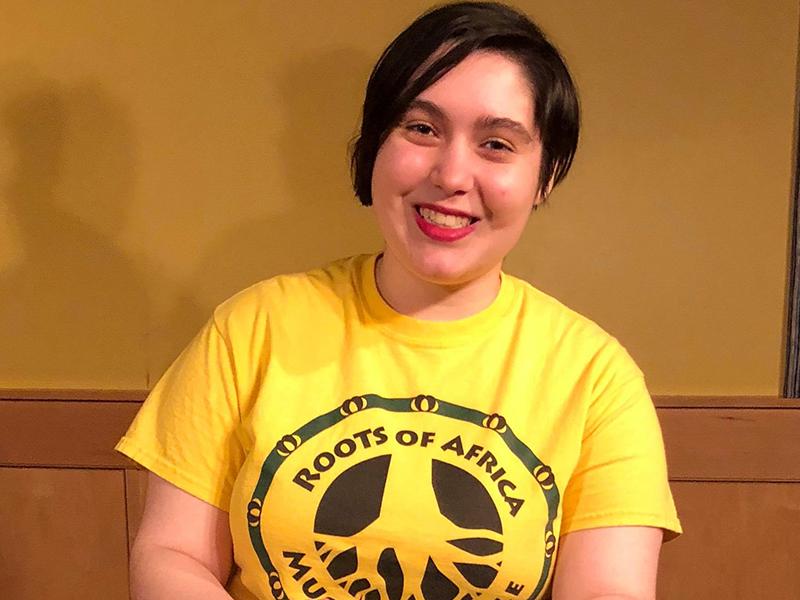 For Jazmyn Borman, choosing a college was easy. One tour of Rensselaer and its nationally ranked Games and Simulation Arts and Sciences (GSAS) Program, and “I knew I wanted to be part of that community.”

It was the right decision then and, four years later, seems smarter than ever.

Borman graduates from Rensselaer May 19 with a Bachelor of Science degree with a dual major in GSAS and computer science and a job as a software engineer with game developer Velan Studios in Troy, N.Y.

That’s only half the story.

Borman also is one of two students to receive the first Bachelor of Music degrees awarded by Rensselaer. And, she has a steady gig with a percussion ensemble—playing a style of music she didn’t discover until she came to Rensselaer.

“I could not have done this anywhere else,” Borman said.

She became acquainted with Afro-Cuban rhythms almost by accident. Borman was registering for classes, looking for an arts elective, and someone recommended Introduction to Afro-Cuban Percussion. One class led to another, and soon Borman was taking private conga lessons, composing music, and performing with three ensembles: Roots of Africa, the Afro-Cuban Jazz Orchestra, and Ensemble Congeros. She will continue to play with Ensemble Congeros after graduating.

By the end of her senior year, Borman had 21 drumming credits and enough additional music credits to qualify for the music degree that Rensselaer introduced in fall 2017. The degree program combines depth in music with breadth in the sciences, media, and engineering to prepare musicians for careers in creative professions.

Although it’s exciting to be among the first to earn the degree, that was not Borman’s intent. She took the classes for pure enjoyment and “the satisfaction of learning to master the instrument.”

Her passion for conga drumming is not surprising. When Borman is interested in something, she gives it her all. Not long after joining the computer security club, RPISEC, Borman realized that some students—including her—would do better in a more introductory environment. “The material was designed for a more advanced student,” she said. “We were being thrown in too deep, too quickly.”

Some students were intimidated and left. Borman opted for a different approach. Along with a fellow student, she founded an offshoot organization called IntroSec, and developed a series of lectures and supplemental materials to help students fill in the gaps. That work led to an invitation to present at a hackathon sponsored by the Association for Computing Machinery’s Council on Women in Computing.

Borman complemented her classroom and extracurricular activities with internships at Regeneron Pharmaceuticals and the Blackstone Group. She also took full advantage of Rensselaer connections. A local networking event, The Business of Digital Games, introduced her to her new employer, Velan Studios, a company with strong ties to Rensselaer. Co-founders Guha and Karthik Bala ’97 were named the 2013 Rensselaer Entrepreneurs of the Year.

Equally important, Velan’s emphasis on innovation resonates with Borman. And its location—in the same city as Ensemble Congeros—means she can keep drumming.