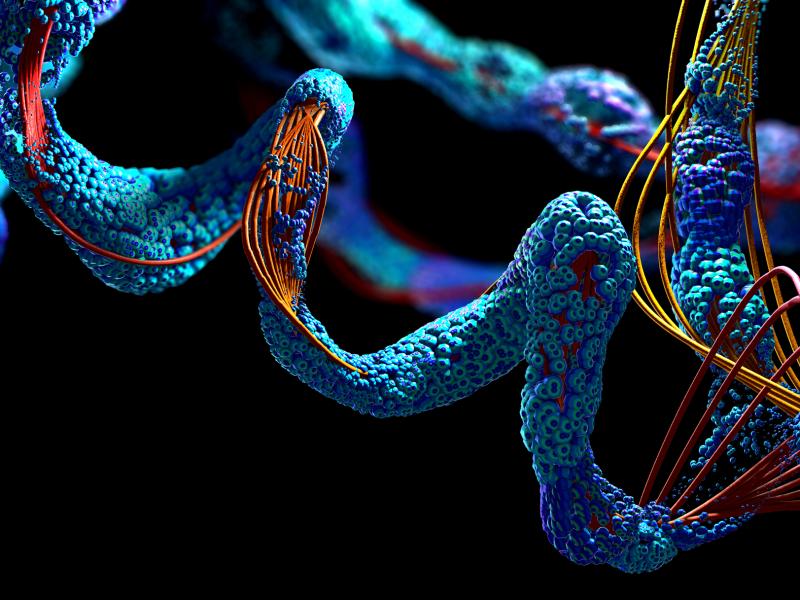 A team including Rensselaer Polytechnic Institute researcher Gaetano Montelione has identified the design principles for creating large “ideal” proteins from scratch, paving the way for the design of proteins with new biochemical functions. The results were published today in Nature Communications.

The team had previously developed principles to design small versions of what they call “ideal” proteins, which are structures without internal energetic frustration. Unlike natural proteins, which have structural imperfections that provide unique functions, ideal proteins are designed from scratch assuming no structural imperfections. This allows the researchers to begin with such an ideal design and, by adding imperfections, learn about the relationship between those structure and unique functions they create.

“Sometimes we learn the most from these ideal proteins when their experimental structures differ, rather than match, their intended design, since this can lead to a deeper understanding of the underlying principles,” said Montelione, co-author and professor of chemistry and chemical biology and a member of the Center for Biotechnology and Interdisciplinary Studies at Rensselaer Polytechnic Institute.

The paper “Role of backbone strain in de novo design of complex α/β protein structures” was produced by a team led by researchers at the National Institutes of Natural Sciences (NINS) in Japan.

Such ideal proteins are typically designed with a molecular feature called beta strands, which serve a key structural role for the molecules. In previous designs, the researchers successfully designed alpha-beta proteins with four beta strands.

“The ideal proteins we have created so far are much more stable and more soluble than proteins commonly found in nature. We think these proteins will become useful starting points for designing new biochemical functions of interest,” said co-first author Rie Koga, researcher in Exploratory Research Center of Life and Living Systems at NINS.

The team found that while the designed proteins were structurally ideal, they are too small to harbor functional sites.

“We set out to test the generality of the design principles we developed previously by applying them to the design of larger alpha-beta proteins with five and six beta strands,” said co-first author Nobuyasu Koga, associate professor in the Institute for Molecular Science of NINS.

The results were puzzling. They found that their experimental structures differed from their computer models, resulting in proteins that folded differently by swapping the internal locations of their beta strands. The team struggled with the strand-swapping puzzle, but by iterating between computational design and laboratory experiments, they reached a conclusion.

The reason for the strand swapping, they determined, was due to the strain of the whole system on the foundational backbone structure. According to Nobuyasu Koga, the strain is global, instead of connection to connection. Proteins can adjust the length and register of strands across the system to alleviate this backbone strain.

Next, the researchers plan to continue studying the trade-off between more functional proteins with what could be considered less-than-ideal qualities.

“We would like to design proteins with more complex functional sites by incorporating non-ideal features such as longer loops, which are important not only for function but also for relieving global backbone strain,” said David Baker, co-author and professor of biochemistry at the University of Washington.