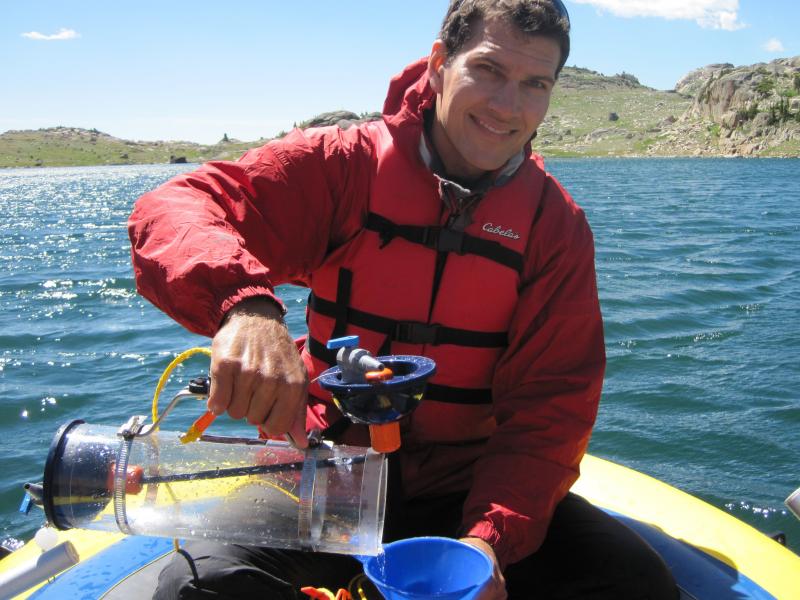 Understanding that role, as well as the impacts of climate change on fresh water lakes and reservoirs, is central to the work of Kevin Rose, who recently joined the faculty at Rensselaer Polytechnic Institute (RPI). With a focus on aquatic ecology and biogeochemistry, Rose’s work will complement ongoing research through the Jefferson Project at Lake George.

“My goal is to understand lakes in a larger context, as part of the global carbon cycle,” Rose said. “As a researcher, one way to get at that context is to look at water quality characteristics, such as water clarity. Water clarity is often tied to the presence of dissolved organic carbon.”

Dissolved organic carbon (DOC) refers to a broad group of molecules that come from the breakdown of organic matter in the watershed. A common example of DOC comes from tea – as dissolved organic carbons emanate from tea leaves when they are introduced into water. Similarly, DOC from leaves and other organic matter lend a brown tinge to lake water, reducing water clarity.

In his research on carbon cycling and water clarity, Rose uses instruments such as high-frequency sensors and hydrodynamic-ecological models. His research has taken him around the globe to lakes such as Lake Atitlan in Guatemala and Lake Rotorua in New Zealand.

“Dr. Rose is offering valuable insight into the functioning of Earth’s metabolism, answering questions of great relevance to our changing global climate,” said Curt Breneman, dean of the School of Science. “We are pleased to welcome Kevin to Rensselaer, and we look forward to the many collaborations he will build through the Jefferson Project, the Darrin Fresh Water Institute, and his continued research on lakes around the world.”

Rose has been appointed to the Frederic R. Kolleck ’52 Career Development Chair in Freshwater Ecology as an assistant professor in the Department of Biological Sciences in the School of Science at Rensselaer Polytechnic Institute. He received a bachelor’s degree in materials science and engineering and in international relations from Lehigh University, and a doctorate in ecology, evolution, and environmental biology from Miami University in Ohio.