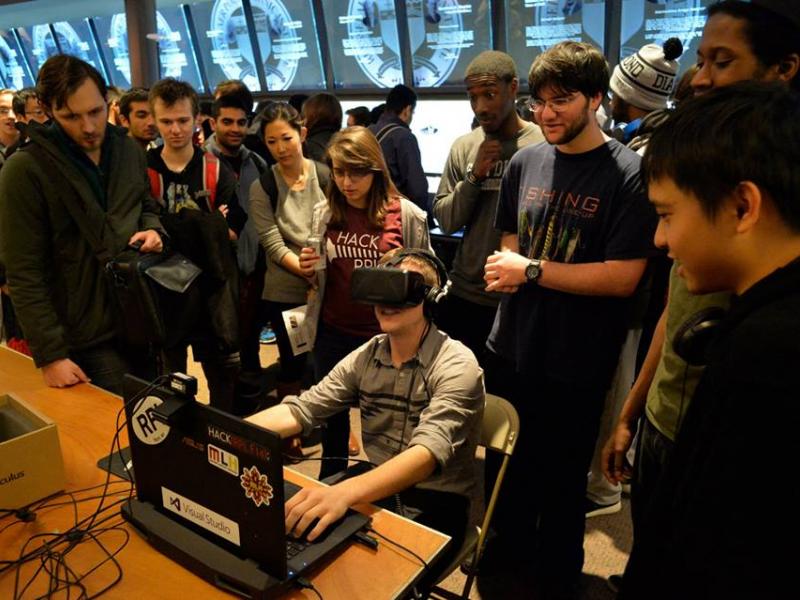 Troy, N.Y. – Most people think of “hacking” as a computer security issue. But, to the members of the Rensselaer Polytechnic Institute student hackathon organization, dubbed “HackRPI,” it simply means using technology to develop or create something that’s never been used before, which for students is part of the excitement and challenge. Plans are underway to host the third annual 24-hour “hackathon” event on the Rensselaer campus Nov.12-13.

During the two-day event, the Darrin Communications Center will serve as the central hub—and temporary home—for the avid student hackers focused on creating projects in areas of technology that address hardware, web, data, mobile, video game and virtual reality, and the humanitarian fields, among others.

“We are driven by a passion for creating an environment where students can learn from each other and use their creativity and ingenuity to create a project that they are proud of,” said Matt Poegel ’17, who is majoring in computer science and math and serves as one of co-directors for this year’s event. “All of the organizers have been to hackathons at other schools and want to bring that community to RPI. Our data shows that more than 80 percent of students want to come to HackRPI to learn new technologies, so that has been our primary focus in organizing HackRPI 2016.”

In addition to Poegel, Andrew Batbouta ’17, who is in the co-terminal program and now pursuing his master’s degree in computer science, are serving as co-director, along with Aaron Perl ’18, also a computer science major, who is part of the organizing team.

Due to the timing involved in creating quick projects over an allotted period, hackathons are also known for attracting the attention of major technology companies that may often provide career opportunities, mentorship, food, and cash prizes. Representatives from Major League Hacking and several corporate sponsors, including Apprenda, Bloomberg, Dell, Pitney Bowes, IBM, Illium VR, Mitre, Trip Advisor, and Viacom, and many more are supporting the event.

The event was founded in 2014 by student co-directors Sebastian Sarbora ’16, a dual major in computer science and electrical engineering, and Jazmine Olinger ’16, a dual major in computer science and mathematics who says that she became interested in programming in ninth grade, along with Jacob Martin ’16, and Robert Rouhani ’16. Some of the founders went on to develop Ilium VR, a local start-up company focused on creating advanced rifle controllers for virtual reality games and simulations.

“Sponsoring HackRPI is an investment in the future of computer science,” said Sarbora. “Hackathons allow students to explore new technologies and collaborate with one another in a fun, relaxed environment. They also offer a more engaging way for students to learn about software development than traditional schoolwork. It’s been great learning experience for me to have been involved in launching the event here at RPI.”

The event exemplifies The New Polytechnic, an emerging paradigm for teaching, learning, and research at Rensselaer. The New Polytechnic emphasizes and supports collaboration across disciplines, sectors, and regions to address the great global challenges of our day, using the most advanced tools and technologies, many of which are developed at Rensselaer.