Pseudomonas aeruginosa – The Molecular Tools of a Bacterial Survivor 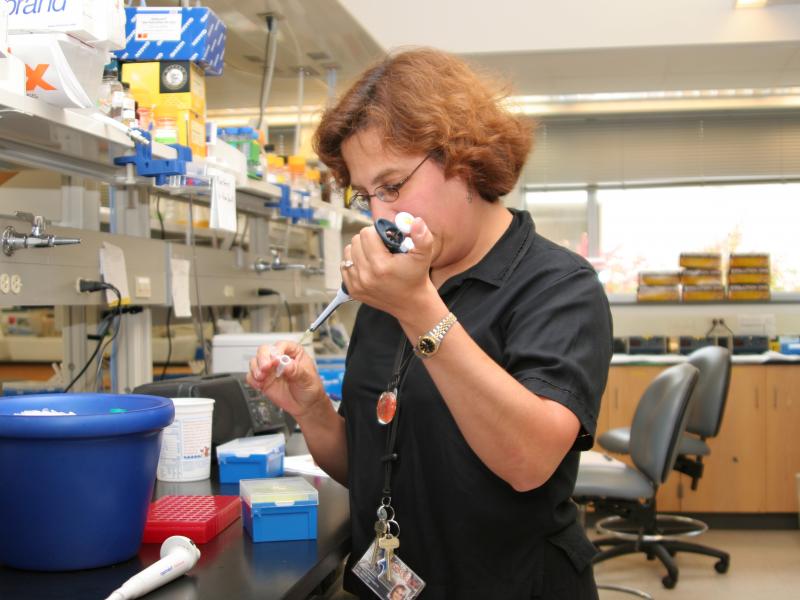 The bacteria Pseudomonas aeruginosa can thrive in environments as different as the moist, warm tissue in our lungs, and the dry, nutrient-deprived surface of an office wall. Such adaptability makes it problematic in healthcare – where it causes infections in cases of cystic fibrosis, cancer, HIV, and other immune-compromised conditions – but also makes it a fascinating subject for study. How does Pseudomonas survive in so many environments? And can we use that knowledge to control it?

With the support of a three-year, $600,000 grant from the National Science Foundation, Rensselaer Polytechnic Institute (RPI) researcher Blanca Barquera is tackling the problem, exploring the biochemical mechanisms that protect Pseudomonas in its many habitats. The project builds on Barquera’s experience with transport proteins, molecules on the cell membrane that serve as gatekeepers between the interior of a cell and the outside world.

“These organisms are able to live everywhere, under conditions with an enormous variety of food supply, salt levels, temperature, acid/base level, and oxygen level. And we have to ask – how can they do this?” said Barquera, an associate professor of biological sciences and member of the Center for Biotechnology and Interdisciplinary Studies. “In order for the organisms to survive in so many different environments, the interior of the cell must remain a hospitable place for the biochemistry of life, regardless of what happens outside. And there are proteins in the membrane that are responsible for this.”

In her lab, Barquera seeks to understand the mechanisms of these proteins – enzymes that populate the cell membrane  – and to determine the roles played by the proteins, and ion gradients they generate, in the physiology of the cells. Her work provides fundamental insights into the ways that bacteria operate, both when they are beneficial and when they are harmful.

Barquera’s research fulfills the vision of The New Polytechnic, an emerging paradigm for higher education which recognizes that global challenges and opportunities are so complex, they cannot be addressed by even the most talented person working alone. Rensselaer serves as a crossroads for collaboration — working with partners across disciplines, sectors, and geographic regions, to address global challenges — and addresses some of the world’s most pressing technological challenges, from energy security and sustainable development to biotechnology and human health. The New Polytechnic is transformative in the global impact of research, in its innovative pedagogy, and in the lives of students at Rensselaer.

Transport proteins make up the active interface between the cell and the environment, and among the most important of these proteins are those which transport ions – atoms or molecules with a net positive or negative electrical charge – into and out of the cell, Barquera said. Ion transport proteins maintain favorable concentrations of ions inside the cell, and also are at the heart of energy production. Transport of positively charged hydrogen and sodium ions, called cations, create gradients that provide energy for diverse cellular processes, such as cell motility, import of nutrients, and extrusion of chemicals that are toxic to the cell.

In the current project, “Control of Na+ and H+ transport in bacterial adaptation,” researchers will seek to understand how transport proteins that move hydrogen and sodium cations through the cell membrane allow Pseudomonas to adjust its metabolism to different environmental conditions.

“In the lab, we can eliminate the proteins one at a time and see what happens to the organisms. If you remove the protein associated with salt exchange, how do they live? Can they live? How will they compensate?” Barquera said. “To assess this, we can measure their activities and figure out their function. It’s a battery of experiments where you put it through many combinations and look at the results and learn about the organism.”

In previous research with Pseudomonas, Barquera showed how a signaling molecule the bacteria secretes under high population densities causes a breakdown in the respiratory chain, killing some of the population and triggering the creation of an antibiotic resistant biofilm among the survivors. Her work varies from isolating proteins in a test tube to establish the mechanism of the protein, to understanding the larger role of the protein within the cell, including its interactions with other proteins and pathways.

In addition to applications in bacterial ecology, this knowledge is important to many areas of biotechnology – such as waste remediation, metabolic engineering, and bacterial production of natural and artificial products – where adaptation to new conditions is important.