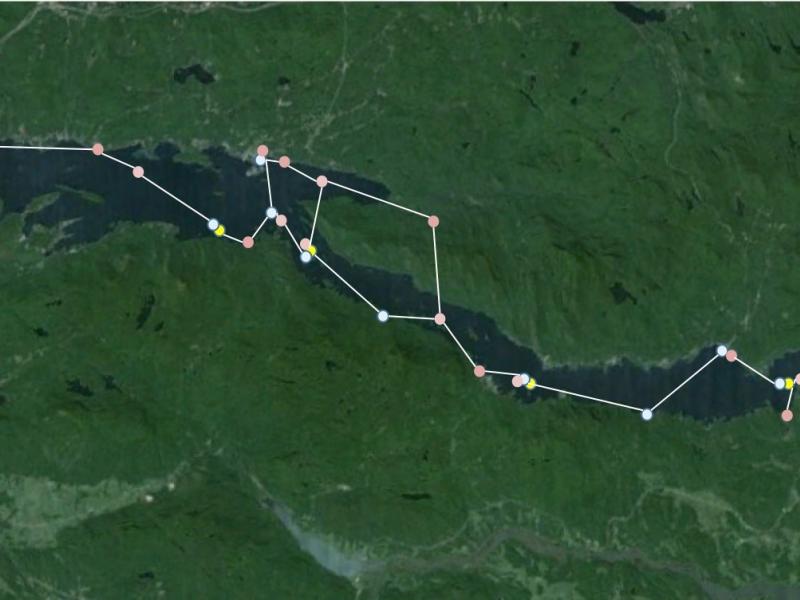 With support from the National Science Foundation, The Jefferson Project at Lake George is poised to complete the most powerful aquatic monitoring sensor network in existence. Spanning the full 32-mile length of the lake, 41 separate smart sensor platforms will collect roughly 9 terabytes of data per year, creating a real-time digital view of the state of the lake.

The Jefferson Project – a collaboration between Rensselaer Polytechnic Institute, IBM Research, and The FUND for Lake George – was founded to develop a new model for technologically enabled environmental monitoring and prediction to better understand and protect the Lake George ecosystem.

In the three years since launch of the project, researchers have installed half of the 41 smart sensor platforms, connecting them with supercomputers and researchers at Rensselaer Polytechnic Institute and IBM Research in Yorktown Heights. A new $917,000 National Science Foundation grant awarded to researchers at Rensselaer, in combination with a $500,000 grant received earlier this year from the New York State Higher Education Capital Matching Grant Program (HECap), will fund completion of the network within the coming year.

“When complete, the smart sensor network will operate collectively as a single integrated instrument, the most powerful and comprehensive of its kind, to monitor indicators of physical, chemical, and biological activity on Lake George,” said Rick Relyea, director of The Jefferson Project and a professor of biological sciences at Rensselaer Polytechnic Institute. “Already, the data we are collecting, mostly from the southern end of the lake, have clarified our understanding of the present state of Lake George, and are guiding research into the most pressing questions.”

“This grant will ensure that our goal of creating the world’s smartest lake informs effective protection for generations to come,” said Eric Siy, executive director of The FUND for Lake George and associate director of The Jefferson Project.

The smart sensor network transcribes the story of the lake, marking the passage of day and night, the ebb and flow of seasons, and the din of human activity with instruments that collect approximately 20 unique indicators of weather, water quality, and water circulation. When completed, the 41 instruments within the network will collect roughly 9 terabytes of data annually from as many as 36 locations, communicating that data to supercomputers and researchers.

The continuous numerical depiction from the smart sensor network fuels a series of computer models and research projects. Computers controlling the sensor network are equipped with “edge analytics” and smart technology that allow the network to adapt to changing conditions semi-autonomously. For example, the network may notice an interesting event, like heavy stormwater run-off, and collect data more frequently and in more locations for the duration of the event.

Data are used to validate the accuracy of computer models, such as those depicting physical functions like weather, run-off, and circulation within Lake George. The computer models in turn reveal those processes in high-resolution, using algorithms and computing power to allow researchers to predict the results of changing conditions – like an increase in salt or invasive species – and to explore the past, present, and future of the lake.

Scientists also use the sensor data in their research – as is the case in a project where sensor data are being used to track the movements of zooplankton – and to shape a research agenda, such as the ongoing experiments at the Rensselaer Aquatic Laboratory.

In the first season of experiments, researchers tested the effects of varying concentrations of salt on lake ecosystems. Studies around the world have shown that salt concentrations like those seen at Lake George have little effect on lake organisms. The experiments at Rensselaer are examining whether the same is true for the rising, but still relatively low, levels of salt in Lake George. But data from the sensor network indicate that, during snowmelt events, salt concentrations in tributary streams can be orders of magnitude higher than the lake itself, provoking a new series of experiments that are examining stream ecosystems.

“Experiments are helping us to understand where some of the threats likely are and are not, and that in turn feeds back into what we should be monitoring and where we should deploy sensors,” Relyea said. “By design, the system is interconnected at all levels.”

At Rensselaer, The Jefferson Project fulfills the vision of The New Polytechnic, an emerging paradigm for higher education which recognizes that global challenges and opportunities are so complex, they cannot be addressed by even the most talented person working alone. Rensselaer serves as a crossroads for collaboration — working with partners across disciplines, sectors, and geographic regions, to address global challenges — and addresses some of the world’s most pressing technological challenges, from energy security and sustainable development to biotechnology and human health. The New Polytechnic is transformative in the global impact of research, in its innovative pedagogy, and in the lives of students at Rensselaer.