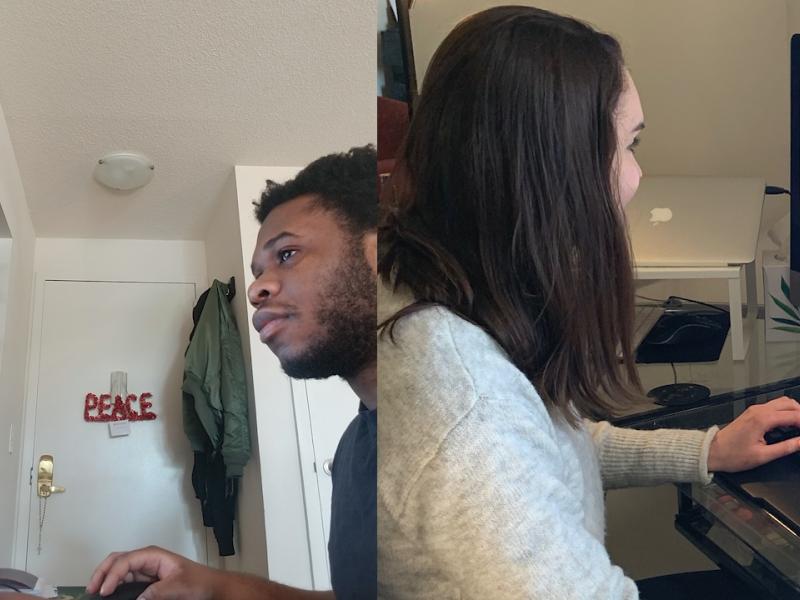 TROY, N.Y. — On a typical April day, Jackie Pelham would spend most of her time in a lab coat and goggles. Working at a laboratory bench, she would examine proteins found in the body. But lately, Pelham has traded her lab coat for a laptop and her lab bench for a desk in her home. Rather than observing biochemical processes, she is poring over previously collected data. Somewhat unexpectedly, even to her, Pelham sees this temporary trade-off as an opportunity.

For many scientists and engineers at Rensselaer Polytechnic Institute, the COVID-19 pandemic has presented a new challenge in the form of remote research. As faculty have moved their instruction online, they’ve also continued to lead their labs in making discoveries.

Jennifer Hurley, an assistant professor of biological sciences and member of the Center for Biotechnology and Interdisciplinary Studies (CBIS) at Rensselaer, runs the lab where Pelham works. She said being stuck at home has forced people to analyze information and write up their findings with much more focus.

“These are things that might not have gotten done if we weren’t forced to kind of remove ourselves and take a moment,” Hurley said. “We are finding really interesting data, and we are realizing that we really should present that to the community.”

Hurley and Pelham are both circadian biologists who are interested in how the human body — down to each individual cell — keeps time. In a lab setting, they spend an extensive amount of time studying the ways in which the circadian clock touches every protein, RNA, metabolite, and lipid in the body.

“That means we have these enormous data sets of exactly what is changing over the day and those data sets are computational,” Hurley said. “Now, some of the lab members are sitting at home crunching exactly what is controlled by the clock and how that impacts biology.”

“There have been some things on my docket that I’ve been meaning to do for a long time, which is sort of explore my protein from a computational level,” Pelham said. “We’ve been finding out some pretty neat things about our protein and what it’s doing over the day.”

Rensselaer prides itself on this type of ingenuity, as well as a particular strength and emphasis in data dexterity. As researchers lean on both, they are finding ways to make the most of this challenging time while continuing to contribute to the scientific community.

“The silver lining in this situation is that now you have time to go over the literature and actually sit down with your data and pull out things that, at least originally, you didn’t think you needed,” said Samuel Stephen, a National Science Foundation Graduate Fellow and a doctoral student in the department of biomedical engineering.

Stephen works in the lab of Deepak Vashishth, the director of CBIS and a professor of biomedical engineering, where he investigates the effect of obesity and diabetes on bone.

Remote research has encouraged Stephen to revisit the spectroscopic data he collected from bone samples last year. His new analysis has uncovered additional information that he originally believed would require a more time-consuming and labor-intensive biochemical assay in the lab. What Stephen discovered, he said, will provide the lab another way — one that is easier, faster, and more cost-effective — to measure the effects of obesity on bone through which the oxidative processes modify the bone matrix and increase its propensity to fracture. Stephen is now writing a manuscript on his new findings.

“I was able to pull something out that I wouldn’t have been able to get otherwise — at least, not without this time here,” Stephen said.

“This idea of pivoting, and looking at what you have, to try and come up with something new, requires a level of ingenuity,” Vashishth said. “As students have been staying indoors, they are able to take a very deep look at their research, ask some very important questions, and come up with new ways of addressing those questions.”

While these scientists and engineers are eager to get back to work together in the lab, their efforts are making it possible for Rensselaer to continue to work toward solving a number of ongoing global challenges.

“At their core, both science and engineering rely on systematic procedures of extracting meaning from experimental data and utilizing those findings to reveal new processes that can potentiate new technologies or therapies,” said Curt Breneman, dean of the Rensselaer School of Science. “Careful analysis, curation, and modeling of experimental data require time outside of the laboratory, and I’m proud of how Rensselaer faculty are utilizing their home workspaces to dig deeply into their experimental findings and to design the next set of experiments.”