Measuring the Forces of Biology 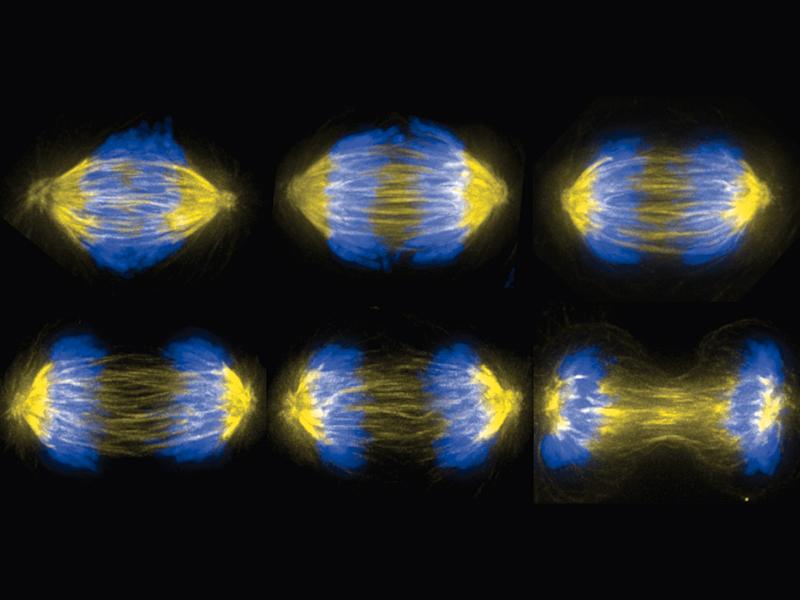 Biology, at the nitty-gritty level of motor proteins, DNA, and microtubules, takes its cue from physics. Consider, for example, the mitosis stage of cell division: two identical sets of DNA from the parent cell must be perfectly divided and separated into two new daughter cells. It’s a physical act, and the cellular structure that does it, the mitotic spindle, is a machine that uses mechanical forces – push, pull, and resistance – to complete the task.

Like most machinery, the mitotic spindle can malfunction, and when it does, DNA can be broken or unevenly divided, errors implicated in the uncontrolled cell division of cancer. But while much is known about the biological components that form the mitotic spindle, researchers like Scott Forth are only beginning to explore the physical forces between those components.

“The mitotic spindle is a complicated, perfectly balanced machine,” said Forth, a quantitative biologist who recently joined Rensselaer Polytechnic Institute as an assistant professor of biological sciences and member of the Center for Biotechnology and Interdisciplinary Studies. “We have a parts list for much of the machinery involved, but we don’t understand how it all fits together to operate smoothly. My work is trying to understand – what are those forces?”

In his research, Forth uses an optical trapping technique to quantify the forces exerted by components of cellular structures like the mitotic spindle.

Many key cellular processes rely on the physical interplay between biological components to perform functions. The “parts list” in these processes is similar: Microtubules, semi-rigid tubes of protein, can serve within the cell as scaffolding, roadways, and a building material for machinery; some proteins serve as fasteners, binding and releasing other materials; and motor proteins use chemical energy to push and pull materials along microtubules, or move the microtubules themselves.

To learn more about the mechanics, Forth investigates the forces exerted within subsections of the spindle, using simple “building blocks” composed of a single type of protein and microtubules. For example, the protein PRC1 binds with microtubules, creating bundles of microtubules and cross-links between them. PRC1 works along with a motor protein, which slides microtubules, and PRC1 slows the motion of that slide through resistance. If PRC1 is knocked out of place, chromosomes will move too quickly apart from each other, foiling the intricate timing of mitosis.

“Within this simple system, we have both a pushing force and a resisting force, and the question is – how do these forces add up to move the microtubules at the proper rate?” Forth said. “This is something we can measure in my lab.”

To do so, Forth takes advantage of the relationship between a polystyrene bead and laser light. When a beam of light is focused on a polystyrene bead, the bead becomes polarized and is attracted to the field of the light beam. Any attempt to move the bead out of position bends the light, and the light pushes back on the bead in turn. Changes in the light’s direction can be measured with a photodetector and converted into a measure of physical force. By attaching cellular structures – like a PRC1 and microtubule assembly – to the polystyrene bead and allowing the structure to function, Forth can measure the physical force generated by the structure.

“The idea is to build key features of the spindle, and measure those forces,” Forth said. “Can we watch and see what’s going on with a given set of proteins, and can understanding the mechanics help us understand how the cell is functioning? That’s the goal.”

At Rensselaer, this research fulfills the vision of The New Polytechnic, an emerging paradigm for higher education which recognizes that global challenges and opportunities are so complex, they cannot be addressed by even the most talented person working alone. Rensselaer serves as a crossroads for collaboration — working with partners across disciplines, sectors, and geographic regions, to address global challenges — and addresses some of the world’s most pressing technological challenges, from energy security and sustainable development to biotechnology and human health. The New Polytechnic is transformative in the global impact of research, in its innovative pedagogy, and in the lives of students at Rensselaer.