How a Cell Knows When To Divide 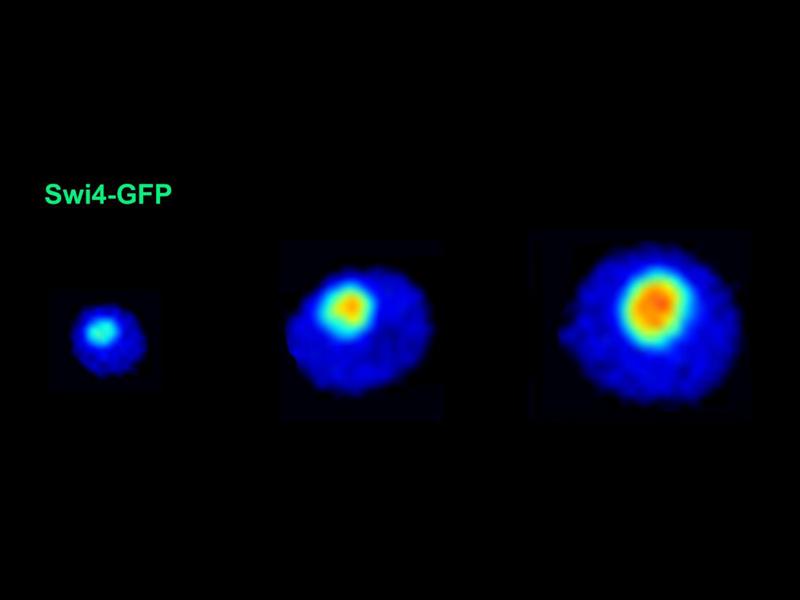 How does a cell know when to divide? We know that hundreds of genes contribute to a wave of activity linked to cell division, but to generate that wave new research shows that cells must first grow large enough to produce four key proteins in adequate amounts. The study, published today in Cell Systems, offers a path for controlling the balance between cell growth and division, which is implicated in countless diseases, including cancers.

“For years we have known that cells must reach a size threshold prior to cell division, but how cells know when they reach that threshold has been a mystery,” said Catherine Royer, lead author, along with Mike Tyers of the University of Montreal. Royer is Biocomputation and Bioinformatics Constellation Professor and Professor in the Department of Biological Sciences at Rensselaer Polytechnic Institute, and member of the Rensselaer Center for Biotechnology and Interdisciplinary Studies (CBIS). “Something sets the threshold and something senses it. This research establishes the mechanism behind this core machinery in budding yeast cells.”

The research also resolves the question of why cells with access to a nutrient-poor environment divide at a smaller size. Both findings are related to the abundance of the four key proteins required.

“Many diseases include an element of abnormal cell size and growth, and at the moment we have few means of controlling those aspects of cell growth,” said Deepak Vashishth, CBIS director. “This research marks a clear path toward targeting transcription factors to change that outcome. It’s a clear example of how translational medicine gets its start at Rensselaer.”

Royer and her team, which included researches from Rensselaer and the Université de Montréal, examined yeast cells, which divide by budding. As with most cells, yeast cells must first synthesize the necessary resources and grow in size, a phase of cell cycle known as G1. About 200 genes must be activated at the end of G1, and the research team examined five proteins—the transcription factors SBF and MBF, the transcriptional repressor Whi5, and the G1 cyclins Cin1 and Cin2—that are collectively required to initiate transcription of those 200 genes.

The researchers used a particle-counting technique to measure the absolute concentration of each of the five proteins present in cells as they grew in size. The technique relies on creating a very small optical volume and scanning “Number and Brightness” microscopy to gather data on light emitted from fluorescent-tagged proteins in a select volume of the cell. Calculations based on the relationship between average light intensity and fluctuations in light intensity reveal the number of molecules in that volume.

Royer found that as the cells grew in size, molecules of four of the five proteins examined reached a number great enough to bind to the estimated 400 binding sites on the 200 genes the proteins control. Commitment to division was triggered when the cell grew large enough to saturate the binding sites.

“In a small cell, there just weren’t enough of them to bind to all of the sites. As the cell grows, the concentration remains the same, but having the same concentration in a larger cell means that there are more molecules, and eventually enough to bind to the available sites,” said Royer. “It turns out that this system is a simple titration mechanism. It’s very straightforward biochemistry.”

The team grew cells in growth medium—a liquid designed to support yeast cell growth—with different kinds of nutrients. When the team examined cells grown in medium with poor nutrients, they discovered that those cells were “up-regulating,” producing more molecules of the four key proteins given their cell size, and therefore triggering commitment to division at a smaller size. The finding explains why cells grown in a nutrient-poor environment are smaller in size.

“It’s counter-intuitive, but at a certain level, it makes sense,” Royer said. “If you’re a yeast cell, and you are in a nutrient-poor environment, your best bet is survival of the colony rather than the individual. And so you divide at a smaller size to support the colony.”

"G1/S Transcription Factor Copy Number is a Growth-Dependent Determinant of Cell Cycle Commitment in Yeast" appears in Cell Systems. Continued research will be funded through the National Science Foundation.

Research on cell size homeostasis fulfills The New Polytechnic, an emerging paradigm for higher education which recognizes that global challenges and opportunities are so great they cannot be adequately addressed by even the most talented person working alone. Rensselaer serves as a crossroads for collaboration — working with partners across disciplines, sectors, and geographic regions — to address complex global challenges, using the most advanced tools and technologies, many of which are developed at Rensselaer. Research at Rensselaer addresses some of the world’s most pressing technological challenges — from energy security and sustainable development to biotechnology and human health. The New Polytechnic is transformative in the global impact of research, in its innovative pedagogy, and in the lives of students at Rensselaer.