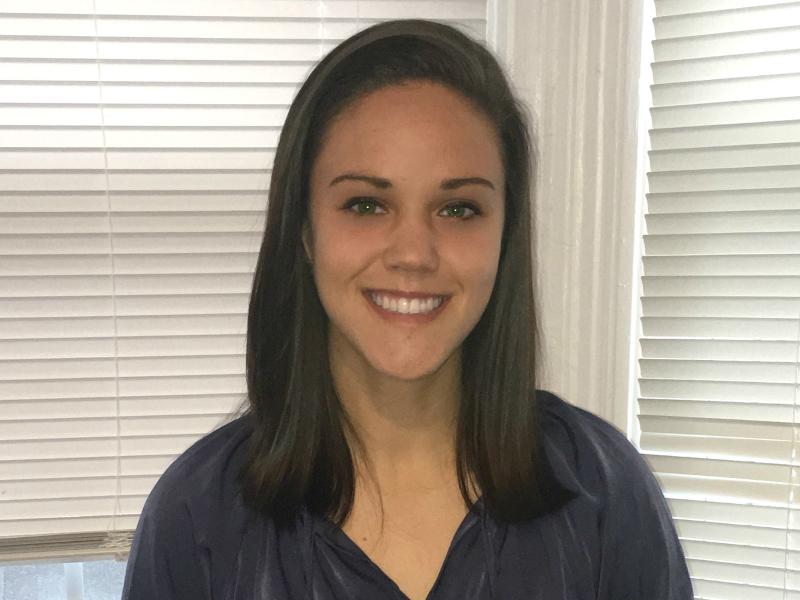 From an early age, Cate Mann envisioned a future connected to the biological sciences. But it was only at Rensselaer Polytechnic Institute that she found her future in bioinformatics, a blend of computer science and biology.

Mann graduates this May with a bachelor’s degree in bioinformatics and molecular biology and a slew of research experience. She will intern at Merck this summer, and return to Rensselaer in the fall to complete a master’s degree she has already begun.

“Now I know what I want to do; I have an idea of where I want to go. And everything I have been able to do at Rensselaer has led me down that path,” said Mann. “The coursework, the undergraduate research, my professors, my advisers, I’ve had so much support. Whenever I’ve been worried that I don’t know the next step, that I don’t know what I’m doing, they have been there to help and to say ‘keep going, keep working, you’ll be fine.’”

Mann arrived at Rensselaer as a transfer student in her sophomore year. As a freshman, she had studied biology in a program with limited opportunity to study genetics, which had attracted her interest since grade school lessons introduced her to Gregor Mendel’s studies of heredity traits in pea plants. She knew she wanted to transfer to a university with a program in genetics, and Rensselaer stood out for its additional opportunities in bioinformatics.

“My work is a bridge between biology and computer science. I am able to talk with biologists and understand higher-level terminology and the meaning of the data they are using—it’s not just numbers to me—and on the computer science side, I know how to code and what analytics to apply to answer research questions,” said Mann.

Her sophomore year at Rensselaer was hard, as she adjusted to the rigorous workload, and she initially worried that she was behind peers who had already served internships. But the opportunities for undergraduate research put her back on track.

“Undergraduate research is like an internship in and of itself. I was able to get the experience, but also take my classes, so I could make up for lost time,” said Mann. “The research I’ve worked on has given me something that I understand and have experience in, and can speak well to. I think it’s been very helpful.”

Mann found time for research in addition to an already full life at Rensselaer. She played on the varsity women’s soccer team, making it to the Liberty League championships. She was a founding member of the Sole Survivor’s Club, dedicated to raising awareness of sexual assault on college campuses. And she worked as an artist services student driver at the Curtis R. Priem Experimental Media and Performing Arts Center. In her junior year, she tore her ACL during a soccer game, adding the burden of doctor’s appointments, tests, and surgery to her other activities. And in the summer before her senior year, she interned at the National Institutes of Health, working on common variable immune disorder.

Her current work is part of ongoing research into circadian rhythms in the lab of Rensselaer Professor Jen Hurley. As part of a collaboration with the Rensselaer Institute for Data Exploration and Applications, the Hurley lab is building computer programs to identify “clock-controlled” genes and patterns of activity across multiple organisms.

Many genes are transcribed in a cycle that oscillates over 24 hours, anticipating the day/night cycle, but some clock-controlled genes oscillate in an unvarying pattern throughout the cycle, while others are either “damped,” meaning the amplitude of the oscillation weakens throughout the cycle, or “driven,” meaning it strengthens throughout the cycle. Clock control is manifested as daily oscillations in the levels of enzymes and hormones to affect cell function, division, and growth, as well as physiological parameters such as body temperature and immune responses.

Mann is building a preprocessing pipeline for a computer program that can ingest and reconcile existing datasets obtained using a variety of analysis methods, and identify rhythmic oscillations.

Long-term, Mann said she hopes to apply her skills to solving riddles in rare diseases, although she has a particular interest in autism, which affects her younger brother. In the immediate future, she looks forward to continuing her education and building experience when she completes her second degree.

Students like Catherine Mann exemplify the vision of The New Polytechnic, an emerging paradigm for higher education which recognizes that global challenges and opportunities are so great they cannot be adequately addressed by even the most talented person working alone. Rensselaer serves as a crossroads for collaboration—working with partners across disciplines, sectors, and geographic regions—to address complex global challenges, using the most advanced tools and technologies, many of which are developed at Rensselaer. Research at Rensselaer addresses some of the world’s most pressing technological challenges—from energy security and sustainable development to biotechnology and human health.