Neuron Function Is Altered by the Widely Used Anesthetic Propofol 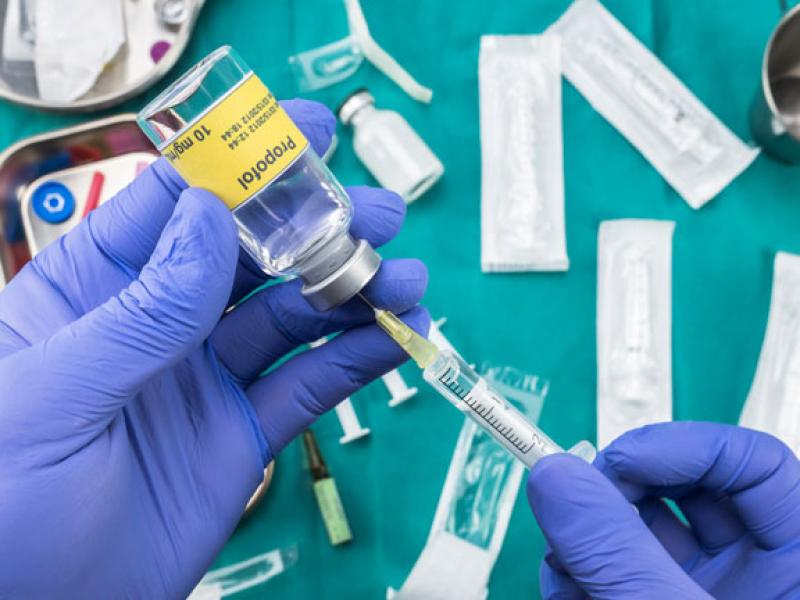 Propofol is the most commonly used drug to induce general anesthesia. Despite its frequent clinical application, it is poorly understood how propofol causes anesthesia.

In a new study published in Molecular Biology of the Cell, a team of Rensselaer Polytechnic Institute researchers identified a previously unknown propofol effect in neurons. The study found that propofol exposure impacted the process by which neurons transport proteins, biomolecules that perform most cellular functions, to the cell surface.

Almost all animal cells, including human cells, are highly compartmentalized and rely on efficient movement of protein material between compartments. Proteins are moved from their site of synthesis to the location at which they perform their function in small carriers called “vesicles.” This transport must be efficient and highly specific to maintain cellular organization and function.

The research team was led by Dr. Marvin Bentley, an assistant professor in the Department of Biological Sciences, whose laboratory studies vesicle transport in neurons. Neurons are particularly reliant on vesicle transport because axons — which are often organized in nerve bundles — can span distances of up to 1 meter in humans. Errors in vesicle transport have been linked to neurodevelopmental and neurodegenerative diseases such as Alzheimer’s and Parkinson’s.

Dr. Bentley’s team observed that vesicle movement of two prominent kinesins, Kinesin-1 and Kinesin-3, was substantially reduced in cells exposed to propofol. The team then showed that propofol-induced transport delays led to a significant decrease of protein delivery to axons.

“The mechanism by which propofol works is not fully understood,” Bentley said. “What we discovered was unexpected: propofol altered the trafficking of vesicles in live neurons.”

Overall, the research contributes significantly to our understanding of how propofol works. Most studies that address the anesthetic mechanism of propofol have been focused on its interaction with an ion channel called the GABAA receptor, which inhibits neurotransmission when activated.

This new study demonstrates that vesicle transport is an additional mechanism that may be important for propofol’s anesthetic effect. Discovery of this new propofol effect has important applications for human health and may lead to the development of better anesthetic drugs.

“By using state-of-the-art live cell imaging technologies, Dr. Bentley’s team has furthered our understanding of the mechanism of action of a widely used drug that is already impacting human health on a daily basis,” said Curt M. Breneman, Dean of the School of Science. “Dr. Bentley’s research may pave the way for the development of related compounds that use these same mechanisms to target debilitating neurodegenerative diseases.”

In addition to Dr. Bentley, the study was co-authored by Dr. Susan P. Gilbert, Head of the Department of Biological Sciences at Rensselaer, and doctoral students Madeline Frank and Alec T. Nabb.